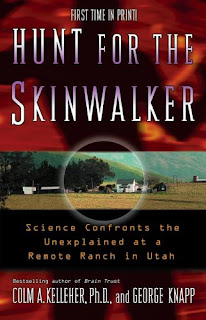 The Hunt For The Skinwalker is an amazingly bizarre book that chronicles events at a remote Utah ranch that have been going on for over 50 years. Vanishing and mutilated cattle. Unidentified Flying Objects. The appearance of huge, otherworldly creatures. Invisible objects emitting magnetic fields with the power to spark a cattle stampede. Flying orbs of light with dazzling maneuverability and lethal consequences. For one family, life on the Skinwalker Ranch had become a life under siege by an unknown enemy or enemies. Nothing else could explain the horrors that surrounded them — perhaps science could.

Leading a first-class team of research scientists on a disturbing odyssey into the unknown, Colm Kelleher spent hundreds of days and nights on the Skinwalker property and experienced firsthand many of its haunting mysteries. With investigative reporter George Knapp — the only journalist allowed to witness and document the team’s work — Kelleher chronicles in superb detail the spectacular happenings the team observed personally, and the theories of modern physics behind the phenomena. Far from the coldly detached findings one might expect, their conclusions are utterly hair-raising in their implications. Opening a door to the unseen world around us, Hunt for the Skinwalker is a clarion call to expand our vision far beyond what we know.

The term Skinwalker is explained as an old Indian name for the creatures that have been seen in the area. These creatures can change forms and take on any shape they wish or walk around in any skin they choose. This can range from large wolf like creatures to black haired 8 foot Bigfoot or Sasquatch type creatures.

I am going to focus on the content it self rather than the book layout. A few chapters in you can tell that the author is a scientist and not a literary master. The English, grammar and flows are broken and sloppy at times but you can get through it. The content is something beyond science fiction. I say that because the events and accounts that are chronicled are sometimes beyond imagination.

This is where this book gets creepy. The first 1/3 of the book follows the accounts of the Gorman family who moved away from the city and purchased this ranch to raise cattle. The prior owners warned them about odd events and told them never to dig on the property for their own safety. The Gorman’s didn’t think much about it and focused on their ranch. Over the next year the Gormans were tormented by these events. Their cattle would be killed, mutilated in broad daylight with surgical precision, objects in their home would disappear and reappear elsewhere, hear voices through the nights, and see and be chased by orbs of light. In a few occasions they encountered a large wolf like creature that was threatening the cattle, so they shot the wolf multiple times but there was no blood and as they chased the animal through the woods its tracks would abruptly stop and the animal would be gone.

The really crazy parts are the accounts of Tom Gorman seeing strange orange clouds above the treelines that could only be seen from certain angles. Looking at them straight on he said he could see clear skies through it, much like a window. Through these clouds would appear these large flying discs or as he described them, manta ray looking objects.

Eventually the family can no longer take the torment and financial stresses from losing prime cattle, so they sell the ranch. Rumors of the events were known locally and eventually spread to the National Institute of Discovery Science (NIDS). NIDS is backed by a very wealthy source and in the interest of scientific discovery, NIDS bought the ranch to study and capture what as going on.

During the course of NIDS’ investigations they encountered similar events, which were recorded and documented by a team of scientists. Their most amazing event was observed up on a ridge looking down into the ranch at night. Below them a ball of light appears and a large black haired creature climbed out of the light, like getting out of a swimming pool. Then it walked into the nearby woods and disappeared.

The middle part of the book goes into the history and other areas in the country where odd events like this are happening, a little UFO history and background on these types of events through the years. The last part of the book goes into all the possible explanations for these events. They cover the possibility of mass hallucinations, a hoax, government involvement and testing of advanced tech, and multi-dimensional portals to a parallel universe.

I read a lot of books around the paranormal, UFOs, cryptozoology, and unknown phenomena. I can’t get enough of it. The Earth and this universe is so vast and complex and we know so little anything is possible. Hunt for Skinwalker is one of those books you must read if you have any interest in the subject. Most of the books out there are vague and make obvious conclusions. What makes this book so intriguing that if this is a hoax at any level, then the people behind it are far more creative and imaginative than any science fiction writer today. You can’t 100% say that everything happened exactly they way it’s told, but some of these accounts are so far out there beyond conventional fiction that you have to wonder that it could only be detailed like that as if it really happened.

If you want a really creepy book to read and you are into strange phenomena, I recommend this one. It’s up to you if you buy into any of it or not. There is enough data out there that you can’t dismiss it completely but not enough to say it’s real.