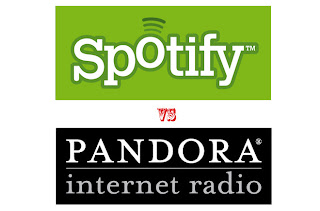 I am a music junkie. Every single day I listen to music, some days more than others, but everyday I enjoy some tunes. The majority of my music consumption is when I am working which could count for 4-6 hours a day, not including commuting time. So I listen to a bit of music.

Up till about 5 years ago I used to spend an butt load of money on CDs, spending time in music shops combing over the CDs, usually the off beat compilations of various techno DJs, alternative bands, and non-top 40 radio station replay lists. That’s when I turned to Internet Radio. I started toying around with it all that way before it was called Internet radio and it was websites streaming music. Then the RIAA figured it out and closed them down quick.

Then Pandora came around which was the first mainstream, legit, Internet radio service offering that I hooked on to. Initially I used the free, ad filled version, but as soon as Apple and Pandora offered the subscription to be paid through the iTunes store I jumped on board. However, it seemed at around that time, the shuffle and variety of Pandora’s music selection went downhill. I noticed, along with others around the Interwebs, that Pandora started ‘randomly’ selecting songs that were very similar to the Top 40 playlist that terrestrial radio stations were playing. Even if I created new playlists with non-top chart artists the Pandora selections always seemed to drift back to the top songs of the month and the songs or artists that I try to build the playlist/station around, it would be days before I heard anything from them. Odd.

Then Spotify became available to the United States. Like most new techie offerings I jumped on board to check it out but quickly got turned off by it, primarily from it’s more complicated and confusing playlist setup and at the time no radio feature like Pandoras. Then that all changes a few months ago.

Spotify introduced a radio feature, similar to Pandora’s, but with the inclusion of Spotify’s playlist ability it is far superior. The initial problem I had with Spotify was that I had to go and create playlists from scratch by searching for all the songs and artists. It has the ability to import your iTunes library and bring in my already made playlists but if I wanted to listen to music I have heard thousands of times  over I would just carry around my 160GB iPod. I wanted new music, variety, get introduced to new artists and songs. Since Pandora no longer was throwing me those unknown rarities I took my search and money elsewhere.

After a few weeks of the free version of Spotify using my iPad, iPhone and the desktop (both Windows and Mac) I knew that I had to switch.

Pandora One is $3.99 a month and with that you get no ads, can listen longer, a claim of better streaming quality and that’s about it. No change in the amount of skips you can have and the number of stations you can have is a non issue. So the difference between the free Pandora and paid, unless you listen 8 hours a day, every day is minimal to the value you are gaining. Throw in the noticeable changes to the songs that Pandora throws in the mix and the value is not worth it in my opinion anymore.

After Pandora became annoying I gave Spotify another shot. This time I explored heavily into one of the best features the Spotify desktop client has, apps. I knew of ShareMyPlaylists.com for a while but then starting using the Rolling Stone app, Billboard, last.fm, Tiesto and a few others. Instead of having to build playlists song by song I could get pre-made ones of top its to independent unheard of artists. Where Spotify really blows Pandora out of the water is the ability to take a song played on the Spotify Radio and add it to a playlist, then go and play that song whenever you want. I have noticed that the intelligence of Spotify’s song selection is not as precise as Pandora’s but the features you get make that a low issue.

For $9.99 a month, less than a cost of an album, I get access to almost the entire music collection out there at my fingertips. The Premium level allows you to play your playlists on the mobile devices, no ads, and offline play. Meaning I can take a playlist I made, mark it for offline mode and it will download the songs to my phone. So for my upcoming airplane trip, no problem.

I highly recommend Spotify if you are big into music. If you are in a cubicle farm and have headphones on the majority of the day then I would almost say that Spotify is a must. Unless the RIAA comes in and continues to destroy the music industry and alienate their customers, it’s going to be hard to top Spotify.