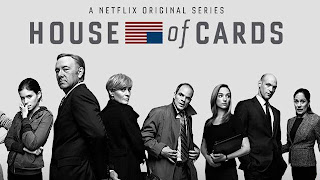 Last night I finished watching the Netflix series House of Cards. The groundbreaking streaming only series from Netflix. House of Cards was released Feb. 1, 2013 and what made it groundbreaking was Netflix released the full season, all 13 episodes, at the same time. No weekly waits, no gaps in the middle of the season, you could consume it as fast or as slow as you wanted, when you wanted.

Since then HBO, NBC, ABC, and other networks have come out saying they are sticking to the traditional, archaic structure of television series. I was skeptical at first on how this would work but I quickly realized that this is the future of television entertainment.

Of course this would only work if you had a quality production and House of Cards did not disappoint. In my opinion this is one of the best TV Dramas I have seen. The style, characters, story, mystery, intrigue, the acting, the photography were above and beyond most of the stuff out there.

Here’s the synopsis for Season 1:

Francis “Frank” Underwood (Kevin Spacey) is an ambitious Democratic congressman and the House Majority Whip. Following his assistance in ensuring the election of President Garrett Walker (Michael Gill), Underwood is informed by Chief of Staff Linda Vasquez (Sakina Jaffrey) that the existing agreement to appoint him Secretary of State will not be honored. Furious at Walker’s betrayal, Underwood and his wife Claire (Robin Wright), an environmental activist, begin seeking out pawns in a protracted political war against Walker. Soon brought into the fray are troubled Congressman Peter Russo (Corey Stoll) and Zoe Barnes (Kate Mara), a young political reporter for the Washington Herald newspaper.

House of Cards Trailer
Even though I could have watched all 13 episodes in one chunk I chose not to. After consuming the first 3 in one night I was worried that I might burn myself out so I took several days break between episodes. When I did watch, personal time allowing, I would watch no more than two in a row. From the premiere to today I watched all 13 episodes over about 6 weeks instead of being forced to drag it out over 13 weeks.
The other huge benefit with the streaming aspect was I didn’t have to manage collecting episodes if I missed one. No DVR recording, space management, worrying if something else was going to record instead of this one. The nature of TV series of today is that the episodes are very serial in nature, if you miss one you can be out of the loop and get lost very quickly then the series is ruined and you stop watching. I didn’t have to worry about that with this one.
The series itself I would give a 4 out of 4 stars without blinking. I can’t wait for Season 2.
Netflix’s approach with this series is the future and the other networks and providers better pay attention. Personal time for most people is a valuable commodity. If you chain them to your schedule you may lose viewers but if you enable the user’s more control on consumption of your entertainment I think you will find that you will get more viewers. Why? Because it’s on their time tables not yours and without the need to have a DVR collector. Stream and go.
Frank Underwood Quotes
Netflix will continue this approach with another new series called Hemlock Grove that is coming out, all 13 episodes, on April 19th. A horror series. I will be checking that one out… at my leisure on my time table.
Hemlock Grove Trailer (April 19, 2013 release)
End of Line.