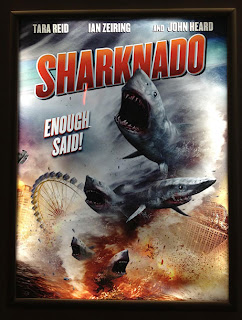 Over the weekend I broke down and watched the highly hyped SyFy movie Sharknado. Currently Sharknado has an 83% rating on RottenTomoatoes.com, I am not sure why, but it does. I watched it, experienced it, thought about it and now wrting a review about it. Spoilers ahead, although you need a plot to be spolied but I will warn you anyway I might give some critical plot points away.

The ‘movie’ starts off on a boat in the middle of the ocean. We find a few guys on the boat exchanging money and you get teased that this might be a thrilling story about terrorists, government conspiracies or mercinaries. Nope. A few minutes in a storm grows from zero to hurricane and a bunch of sharks fly on deck and eat everyone. The Sharknado spawning storm begins.

We skip to the beach where a guy from 90210 is surfing. The close up shots show a clear blue California sky but on the wider shots it’s Hurricane David coming. Throughout the whole movie and close up shots look at the sky.

As the storm approaches we cut into a bar, that the 90210 guy apparently owns, the TVs are on and you hear that Hurrican David will hit the California coast and Global Warming is to blame along with the migration of sharks. Back to the water and the migrating sharks start eating everyone and I mean everyone… except fot the 90210 guy. They ignore him.

Back to the beach side bar to tell the people to flee, even seeing a hurrican coming right for them and the whole beach just eaten, they still have to be told. A big wave crashes into the bar sending sharks in and eating some patrons now. But don’t worry, the bikini laden bartender, that happens to have a shark bite scar on her leg and really hates sharks, takes one out with a pool cue.

Then the 90210 guy, the bikini girl, the regular drunk and an Aussie friend hop in the Jeep/SUV and flee. Then it gets silly from here.

Los Angeles floods to Noah’s Ark level to get the sharks to the places that they filmed this and you see one firetruck in a rescue mode. Other than that, nothing. Throughout the 2 hours sharks are flying around, swimming in houses, up the flooded streets eating poeple.

At the climax LA is getting hit by 3 F-4 tornados that started over the ocean and sucked up thousands of sharks. But dont worry because 90210 guy has a son they hooked up with that’s training to be a pilot. So they build bombs with camping propane tanks to go and throw them into the F-4 tornados. Why? Because one of the characters said that tornados are just a mix of hot and cold air, so create an explosion with hot flame and it will neutralize the tornado and save the city.

Guess what? They win, sharks dead and even the bikini girl survives even though she was eaten by a big shark in the air when she fell out of the helicopter. 90210 guy had a chainsaw and jumped into the belly, cut himself out and pulled her out too.

I can’t give it a rating because it’s something that you have to experience not watch for movie entertainment.