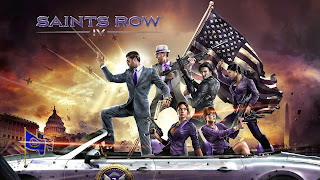 Here’s my review of Saints Row 4 for the Xbox360. My reviews are not going to cover the technical specs or subtle details of the plot, I focus on the entertainment value. Which in my mind is the only value I rate games on, how fun are they to play.

I have played Saints Row 2 and 3 and was a fan of the series. When I heard they were making a 4th I was excited to see where they could go next. Taking a step back to explain the series, the Saints Row series is a Grand Theft Auto like style but doesn’t take itself seriously at all. Since the 2nd one the games have been all about how crazy, vulgar, and insane they can get. Saints Row 4 tops them all in the crazy level, but that’s not necessarily a good thing.

Saints Row 4 starts off as the Saints gang in the White House and you are the President of the United States. From there the realism gets thrown out the window. The world is attacked by aliens, the Earth is destroyed, and you are caught in a Matrix like world simulation fighting the aliens as humanities last survivors.

The game was a blast to play, if you like the others you will enjoy this one. However there were some major flaws that soured me quickly on this installment.

The Good
Would I recommend this game? Only used, discounted and if you played the others. I got it on release day but I felt it was not near the quality of Saints Row 3.
Binary Review – 2 out of 4.