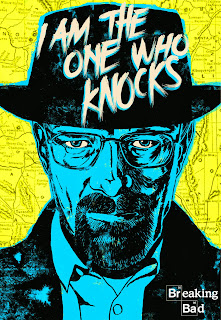 Breaking Bad series finale aired which closed 5 seasons of the best drama on television right now and easily one of the best shows on television ever. 5 seasons of gripping suspense and a story that hooked you from episode to episode that became the water cooler discussion focus in the offices across the country Monday mornings. What was going to happen? What did that mean? Where was it going next?

My Breaking Bad viewing actually started after Season 5 began. I  had heard about the show for years, seeing the memes and blogs about it but not really paying much attention to it. There were enough shows that I was casually watching as one offs and was not going to start a drama that was so tied to the episode orders. You have to watch episode 5 before you see 6. So in order to get the full experience I had to go back and watch the first episode of the first season. Being so far behind I never bothered. But my co-workers kept talking about it and as season 5, the final season, got going they seemed to get more and more excited about it. Then someone sat me down and had me watch the first 10 minutes of Episode 1. I was hooked enough to go home and watch the first episode on Netflix that night. Next thing I knew I had watched the first 4 episodes. I was hooked bad.

So from the beginning of when the second half of season 5 started airing new episodes, I went from Season 1, Episode 1 to Season 5, episode 10 in a few weeks. It as about 2 to 3 episodes every few days which seems like a lot but not when you chill watching the nightly news, Sportscenter, or Duck Dynasty. Instead I watched Breaking Bad. Netflix and AMC on Demand on DirecTV made that binge consumption possible. My fellow associates claimed I poop-socked it, although I did focus  on it in stretches from time to time. Many nights going to bed at 1am after a 5 episode binge, I did not use a poop sock… the facilities are a few steps from the couch. Ha!

I will remain spoiler free going forward if you haven’t seen it or aren’t caught up yet. End to end Breaking Bad is the best show I have watched in a long time as far as a whole episodic viewpoint. There has been very few shows that I have been involved with from start to finish. The last one I was Lost, which the series finale of that show was phoned in, lazy, and flushed the whole show down the toilet and ruined it. Breaking Bad has been borderline genius in the story telling, keeping all the plot points, characters, side topics all interwoven and the series finale closed every single one of them tightly and put a nice blue bow on it.

For as complex as Breaking Bad was, there is nothing left open for interpretation, no open ended questions, just closure. Even though as a viewer you assume what will happen you won’t guess how the show ends. My theories were wrong and have been wrong most of the time but that was the beauty of the story telling of Breaking Bad, the twists and angles they took. Nothing too crazy or unrealistic, just politically, emotionally and strategically different than what you may have thought up.

Breaking Bad is now done and unfortunately there won’t be a show like this one again for years. There will be many that will attempt to copy the formula but few shows will get to that 99% Heisenberg purity level.

If you haven’t seen Breaking Bad, fire up Netflix and start watching it. Any other show you are invested in won’t come close to the characters, story and twists at Breaking Bad has. A show about a dying high school chemistry teacher that gets diagnosed with lung cancer and starts to cook premium quality meth to pay for his bills and provide for his family when he’s gone. The anti-hero, law breaking protagonist you root for even though he transforms into an evil persona. Throughout the show, especially toward the end, they highlight that “chemistry is the study of change”.

Montage from the series, nothing that’s a big spoiler if you haven’t watched it yet.

The show is over and I am glad I succumbed to the peer pressure and watched it. Wonderful entertainment. Now I can get back to reading books.