Last night I went to an event, exhibit, or whatever you want to refer to it as called the Haunted Basement at a Minneapolis, MN art gallery called the Soap Factory. Located along the Mississippi river near the University of Minnesota campus next to an old abandoned grain or flour factory, it set’s the stage for a creepy night.

This was my first year going to this event, the group I went with were veterans, this being their 6th or 7th year. So for them going back year after year I was intrigued.

First off the Haunted Basement is appointment only, you can’t walk in and go. Tickets go on sale in August and they sell out quickly and for good reason. Normally I am not big on the haunted houses, art performances, or theater scene so I was going in a bit skeptical. The crew at the Soap Factory quickly put those concerns to ease and showed me they were very, very good at putting on a show.

When we arrived we had to sign a waiver and the guy at the door, long before you get near entering the basement, began setting the stage. I didn’t notice it, one guy in our group pointed it out, is when you showed your ID anyone who was an Organ Donor on your license he wrote in big letters DONOR at the bottom of the wavier before filing it.

Once we signed in we were told to go sit on some benches and wait our turn. We watched other groups of 4 get called and put on these heavy overalls and protective masks. Curious. It was time for us to get ready and at the entrance to the basement they had us remove everything from our pockets. Wallets, cell phones, keys and anything that was loose that we valued. With severe reluctance I put my wallet, keys and cell phone in the box. In hindsight I am glad I did because what happens and what you do inside, there is a high risk of losing something and probably never getting it back. 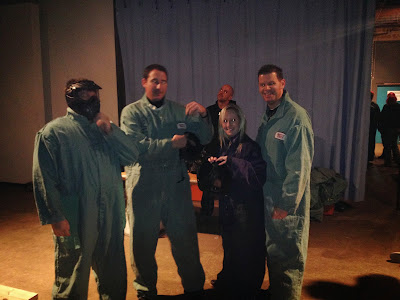 The Haunted Basement changes every year and getting prepared like this was new. No one was really sure what was going to happen once we got down there. After we got dressed we were given a quick safety and rules review along with a safe word. The safe word was to be called out if it got too intense for you and they would remove you immediately. At the end there was an ‘UNCLE’ count and in 2013 they were up over 130 with an all time count of over 900. To set the stage better I would have that count before you go in to see how many people bailed. Of course they could make up a number and get the same effect.

Once we had our masks on we headed down into the blackness. With the masks on it was hard to see and navigate. Once we turned the first corner we were rushed by guys in black with glowing painted faces and large paint guns. I was grabbed and throw against the wall telling me to throw my hands against the wall. I complied and the wall was covered by slimy, paintball paint. Unexpected and gross. But not as unexpected of being shot at, close range. I was not the target but the wall I was up against was. Pitch dark it was pretty cool. They then grabbed me, walked me over to a barrel on the ground and told me to crawl in it, head first. Closed spaces are not my thing, but in the spirit of the event I crawled in there with my heavy, hot overalls and constricting tight mask. I felt them kicking my legs that were still sticking out and heard them screaming to get all the way in. Oh boy… I slid my legs in, tighter and tighter, fetal position, head first in this barrel. Then people on the outside grabbed it and started shaking it.

That was just the first few minutes. I am not going to spoil the rest of the basement experience but highlight a few other key moments that were pretty awesome.

The creepiest part for me was when we got to the short mummy. It or she or he was maybe 5 feet tall, short, in full mummy wrap. Black holes for eyes, saying nothing, making no sound, wobbling back and forth staring at you. The creep level was the freaky doll she was holding. Staring at you, walking right up to your mask. It took a little while to figure out it wanted us to take the masks off and move on.

A little while later there was a spot where there were 3 closet sized rooms and they shoved 3 of us in them. Now, even though I was with a group of 4 people I know, we were split up and separated early on and crossed paths a few times down there but these other people were strangers. So here we are 3 people in a closet sized area not knowing where to go and a freak pops his head in a screams for us to take off the overalls. You can barely get these things on over your shoes and now 3 of us had to take them off in a broom closet space.

All throughout the Basement there are several spots where things break off into different hallways, doors, crawl spaces that you do alone. One that I was sent to was a set of wooden steps leading up. at the top there’s a small crawl space opening. Remember it’s very dark in there, some lights but nothing to see clearly finding these things out is all through touch. I crawled in and I was on a wooden platform up above and when I tried to look up I realized there was a tight netting above me. The crawl space was maybe 3 ft sq. At the end there was anther black hole that had a light down below it. Felling the entrance I knew it was a slide but I couldn’t see the bottom. I didn’t think I could turn around or what was behind me so I went head first down. That was pretty creepy not knowing what I was sliding toward.

Through the rest of the basement there were other sections that creeped me out. The murderous, psycho clown moaning in a ball pit you had to go through was the top creep out for me. The 10 foot tall psycho scarecrow on stilts chasing out with a monkey thing nearby was a close second.

After 45 minutes working through the basement we hit the stairs that led us back to the staging area. At the exit there was a display of 4 sections that were various live feed night vision cameras placed through out and you could watch others go through what you just did. Good amusement to see others freak out.

In a group of 8 that I was with, even though we went through the same basement, each of us has a slightly different experience. Each of us went through different doors, crawl spaces, were told to do different things which made for talking about it that much better because there were things I saw others didn’t and others did things I missed.

GET IN THE TUB!!! (inside joke if you went through it) I got in the tub with 3 others, then got out of the tub. Pitch black, no clue.

Overall the Haunted Basement was not what I expected going in, it was above and beyond. This is definitely an annual staple that I will be going to again. The folks at the Soap Factory know how to put on a show. This is not a Haunted House, boo-scary or hands in the bowl of grapes tricks, this is a sensory screw job that turns your mind around and lets you scare yourself.

Great entertainment and I highly recommend The Haunted Basement at the Soap Factory.