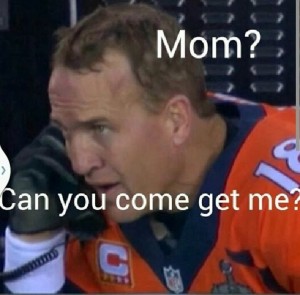 The Super Bowl is over bringing an end to another NFL season. The Seattle Seahawks are this year’s champs after they thumped the Denver Broncos 48-8. A game that was statistically lined up to be one of the closest and most competitive in years turned out to be an embarrassment. The Broncos, led by Peyton Manning, collapsed immediately and never recovered. The first play of the first drive of the game ended up being a horrible snap over Manning’s head into the end zone for a safety. Little league error made by the best offensive team in NFL history, by the numbers anyway.

After that Seattle marched all over the Broncos. They say defense wins championships and this is another game where it partly supports that statement. However, if you go back and look at all the Super Bowl matchups comparing defenses and offenses, it’s almost a 50/50 split if the better defense wins or not. So the statement is fluff in my opinion. Defense’s jobs are to keep the offense in check and in the NFL the most points wins. So if your offense can’t score chances of you winning are diminished.

This year’s Super Bowl was pretty awful. Unless you are a Seahawks fan the game got out of control quickly to keep the interest there. I am a football fan, I love it, but I started tuning out after halftime. The secondary event wrapped around the Super Bowl are the ads. A new cinema of entertainment with 30 second to two-minute mini-movies of commercials. Companies that have a few million bucks to spend on the time for the ad plus another few million to produce it putting their creative talents on a global stage to try to get you to buy a product. Ironically studies show that Super Bowl ads don’t really impact or drive increase sales.

Like the Super Bowl, this year’s commercials were mediocre at best. They were all ‘safe’ aside from whatever artificial uproar people are trying to create around Cheerios and Coke.  People post crap anonymously on the Internet because they can and are not held responsible for it, that’s why I ignore most of it. As I sat an watched the Broncos fall apart in epic fashion, and yes I was cheering for the Broncos, but the commercial filler was just not doing it for me. There were no standouts, some good ones, but nothing that I would expect to see in a ‘Best Of’ montage 10 years from now.

One interesting event happened after the Super Bowl that once again shows how ridiculous America’s security focus is. After the game during the player interviews a 9/11 Truther got through all the levels of security, got on to the podium and spewed out his conspiracy junk before being led off. I put the Vine of the incident the full video is in the link.


Either way I still watched the Super Bowl and will continue to watch it every year regardless of the prior year’s entertainment level. Reading all the opinions and comments are almost as amusing and entertaining as the game itself. I have no idea how I got by watching mediocrity TV without Twitter to keep me sane.