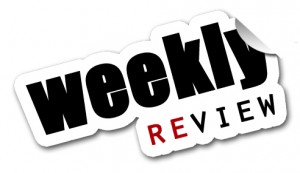 I realized that I started to do to my blog that I swore I would never do. Post mundane, re-posted news stories in order to get content up. Bad Binary Blogger, bad. Impersonal, cheap, lazy and I started to use it as an excuse to not write original content. What the point? I started to become what I despised. Next thing you would see is that I have a Facebook contest out there for some cheap POS gadget if you Like, Retweet, follow, email and tell all your friends. Bottom of the barrel blogging I will not participate in unless I am giving away my own creations and not some promotional push.

I am going to try something new, instead of automatically posting news stories as they cross my feeds to this blog, I will hang on to them and throw my two cents on some of them. There are stories that need to be seen ahead of the weekly reviews but that’s where my Twitter and Facebook pages come in. Those are the medium to where I will send the headlines, the blog will remain pure of words that flowed from my fingertips. Enough of the news aggregator. Add my Twitter to your lists to get those.

This is also an excuse to re-tool my blog’s categories and menus. Break the cycle of this mundane news postings. Binary Blogger needs to be seen here, personality through my writing, not from what news stories I can re-post or link to. Lame and not a reason for you to come back as a reader. Subscribe because you get here what you can’t elsewhere… me, Binary Blogger. Here we go – week in review.

5-year-old breaks Microsoft’s Xbox One security. – Through a process that can simply be explained as button mashing, a 5-year-old broke Xbox One’s security. Trying to access his father’s Xbox Live account the console presented a form to enter the password. The 5-year-old didn’t know it, but tried a few things and exposed a hole to allow anyone to access any Xbox Live account on a console. This exploit, as embarrassing as it is for Microsoft, really only impacts home users directly on the console. So all the responsible parents that actually monitor what types of games their kids play are now exposed to having their kids play daddy’s Call of Duty game.

A 3-year-old was expelled from a Texas daycare for cursing – That’s right, the little snowflake dropped the S-word. The zero-tolerance school expelled him. This is the society that we have allowed to gestate and grow. In the old days the kid got a mouthful of Dial soap by the teachers, now in our discipline free world of rules and reality sheltering, we have policies with ineffective and worthless actions instead.

Amazon releases it’s entry into the home media streaming device – Fire TV – Amazon jumped into the home media game with their new Fire TV, I wrote about this earlier. Same old, same old. Another device to stream services you can get pretty much anywhere else from the latest smart TVs, BluRay players, game consoles and tablets. Differentiation is the key to a successful product when there are competitors and from first glance Fire TV has none. Sure it can play games, but I can play games anywhere just as easily as I can stream Netflix. Meh.

Mozilla CEO Forced To Resign Over Political Issue – This story is scary, very scary. A fully qualified and experienced person that worked hard to be elevated to be the CEO of Mozilla was forced out through a public Internet lynch mob for a political contribution 6 years ago in support of Prop-8. Prop-8 was the California gay marriage ban that at the time was supported and voted through by the majority of California voters but then was overturned a few years later. Free speech? Agree with me or else? The groups with the most money control what can and cannot be said or thought? This is a few steps away from the Thought Police.

Microsoft is ending support for Windows XP – You have heard about it, you have read about it and you probably have seen pop ups on your Windows XP machines about it. Microsoft is ending support for Windows XP on April 8, 2014. This means there will be no more security patches, updates, bug fixes ever again. This means that every hacker in the world will be attacking Windows XP at every angle and putting every single XP computer at risk of new infections that will never be plugged by Microsoft. Upgrade. If you have hardware running XP, go buy a new computer.

Check out my Facebook and Twitter pages for more stories throughout the week. Subscribe to this blog for updates and spread the word, educate, knowledge is power.