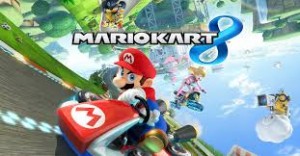 Nintendo’s WiiU next-gen system has been out for about a year now and unfortunately may turn into Nintendo’s worst selling console ever. I wholeheartedly disagree with this assessment and even more so now that Mario Kart 8 has been released on the WiiU. I think the WiiU is a fantastic gaming system for a home with a young family. I have a 5-year-old boy who I have allowed to play video games since he was very young. Up to this point the games I allowed him to play were educational, reading, math, reading and I was sitting there with him and no more than 20 minutes at a time. Now he has the logical intelligence and coordination to play more of the advanced, regular games. The WiiU is a perfect fit for him and me. I love the WiiU better than the Wii, primarily is I want to chill to play games and if I want to be active I have that choice. The Wii motion controls were too forced and campy in my opinion.

Over the past year I have immensely enjoys Super Mario 3D World, Disney Infinity, LEGO City Undercover, New Super Mario Bros. U, and Nintendo Land. Those are all excellent, high quality games that al work very well on the WiiU. In fact I would say the Nintendo game logic is more difficult and actually makes you solve puzzles above and beyond most mainstream XBoxOne or PS4 game.

Now the game I have been waiting for the most has been released and it was well worth the wait. Mario Kart 8 is the next installment of the most entertaining racing series made. Before I get started on the WiiU review I want to make it clear that I truly disliked Mario Kart Wii. Nintendo tried to force the physical racing controls and changed the core of the game so much I played for a little while and never touched it again. That’s how bad I thought it was. Nintendo redeemed themselves with Mario Kart 8. Mario Kart 8 has brought back the series to all of its glory in beautiful HD. 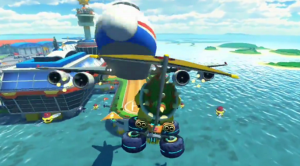 The look is amazing. Nintendo’s artistic efforts in their games cannot be argued. Mario Kart 8 is a crisp, colorful, HD spectacle that does not over do it to the point of distracting you from racing or giving you seizures. The new WiiU courses twist you in new ways, flipping you upside down, slam you underwater and using the new kart addition send you gliding through the air.

The sounds, music, character vocals are just as crisp and like the visuals, don’t take away from the important part of the game, racing.

The game controls and mechanics are what brought Mario Kart 8 back to its prime. I have been playing the kart games since the SNES. I can count how many thousands of races I played, wasting Saturday’s away with epic tournaments in the fraternity house on the N64. Before I had children my wife and our friends would gather around and battle it out in Mario Kart Double Dash on the Gamecube. Mario Kart 8 is a kart game that you can do this again.

Sometimes in life it’s the little things. In Mario Kart that would be the little hop into a power slide, the critical style of the game was ruined in Mario Kart Wii has been fixed and returned to what we expect in Mario Kart 8. Thank you Nintendo.

The major failure points that Nintendo hasn’t figured out or choose not to is the online features and ease of use in the Wii systems. In Mario Kart 8 this has been vastly improved and I have found myself spending more time playing online that I have with the game myself. It’s as simple and choosing Online – One Player or Online – Two Player, picking Worldwide, Regional or Friends and entering the game. The races are smooth, no glitches or skips (that I found), and you have 10 to 12 racers maxing out Mario Kart carnage. It’s a blast.

Even though the WiiU hasn’t become a hit to the masses, I will continue playing it for years to come. I don’t understand why the WiiU is so sluggsh in this tablet crazed world, the best part of the WiiU is the gamepad. I can play Mario Kart or Mario 3D World on the gamepad and not monopolize the TV nor forced to leave the room to play. In our shortened time, I will play a few races on the gamepad while my wife watches whatever reality shows she watches and we can still carry on conversations and spend time together and enjoy out guilty pleasures.

If you have a WiiU then Mario Kart 8 is almost one of those must have games, no question. You won’t be disappointed, you will be brought back to the Mario Kart of the past while playing it in full HD.

Hands down I will say this is the best WiiU game released to date.

Here’s the trailer, and you can search now and find plenty more gameplay videos.