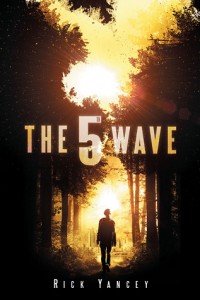 I love to read and do it any chance I can get. Whether it’s short stories delivered via email daily, books about the latest in IT Security or Management to fiction novels, reading is a fantastic activity that everyone should do when they can. I use Goodreads regularly to find new books to read, authors to follow and skim other people’s reviews and I find it to be very helpful. However, every book I read I don’t write a review for, some just aren’t worthy of my time to give my thoughts on, others are either really good and deserve support or are on the other end of the spectrum and need to be called out. The 5th Wave falls into the latter category.

The 5th Wave is categorized as young adult (YA) fiction and seen as in the same class of style as The Hunger Games, Divergent and the The Maze Runner but that’s only because of the style and target audience. After I read The Hunger Games, a series I was consumed by and read all three books in a week, I have kept my eye on the young adult genre as it shows from time to time it’s not as young as they claim. The 5th Wave I saw sitting on bookstore shelves for a while now and started to see more hype about it. After I went back in time and started reading older books I haven’t before and got worn out by my mass consumption of political thrillers I decided to give The 5th Wave a chance.

The 5th Wave is about an alien invasion of Earth. A large spacecraft arrives in orbit, no contact can be made, and extinction level attacks start to happen that the society on Earth call waves. The 5th Wave is the assumed final wave where the remaining population is wiped out. It has aliens, invasions, fight for survival what could go wrong?

As I got into the book about 50 pages in or so the plot started to seem awfully familiar. I could place it at first but then as the waves were being described and talked about by the characters it became clear to me why I recognized it. The alien arrival and attacks or waves are a rip-off from a Discovery Channel series called When Aliens Attack. A TV series I was greatly interested in and watched whenever it was on. The series was exactly this book, how aliens could arrive on Earth and take us out without ever stepping foot on the planet. From the Manhattan sized craft approaching and entering orbit, sending down non-explosive massive mile-long rods to destroy cities with using kinetic energy and leaving no radioactive residue. The book even had a radical idea from the TV show about burying nukes and drilling huge pillars filled with water to super heat the water to steam and sending metal caps into space at the ship. All lifted from the show. The show and book went on to talk about using the birds to spread disease and and so on… This was a big disappointment when the pieces came together for me. Young adults would never catch it, unless they watched Discovery as much as I do.

The next major downfall of this book was a clear case of blatant plagiarism. I will use this term freely and loudly because anyone cannot deny this. There is a scene where the children and teenagers are going through a boot camp situation. The Drill Sargent and the dialogue is almost a 100% word for word ripoff from the movie Full Metal Jacket and the Gunnery Sargent Hartman. This was more apparent than the TV show plot lines.

Aside from the plot the writing style of this book was tough to follow. It would switch from 1st person to 3rd person back to 1st person and at times you weren’t sure which first person you were reading. You’d have to remember the scenario or location to put the pieces together whether it was Cassie or Ben you were following. The other supporting character Evan was never 1st person perspective. Stick to one throughout, don’t hop around.

By the time I got 3/4 of the way through I stuck with it to just finish it. I rarely abandon any book I read once I start and this wasn’t that bad to quit on it but it was close. The end was loose, non-climatic and attempted to leave you on a cliffhanger but I never saw the cliff.

There’s a sequel coming for this book but I don’t think I will rush out and get it. When I get around to it maybe, and that’s a big maybe, which means probably not. I have a 100 other books I want to read and this didn’t make itself worthy to stick with through any kind of long series.