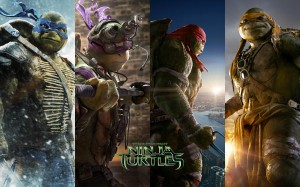 I saw the new Teenage Mutant Ninja Turtles movie over the weekend with my 5-year-old and here’s my review and thoughts on this incarnation of unoriginality from Hollywood. First off, I read the early reviews of this movie and I saw the negativity majority up front, but my son’s enjoyment of the TMNT animated shows and toys there was no way I was going to get out from seeing this. So I set my expectation bar really low as to limit my disappointment, I suggest you do the same.

In the flood of comic book movies a Marvel or DC quality this is not. In fact if you are any kind of follower of the Teenage Mutant Ninja Turtles, even from the first movies in the early 90’s, this movie doesn’t follow the core story much at all. This movie completely took the origins and turned it upside down for starters. After that the plot is all over the place. The story has more holes, inconsistencies, contradictions, and too many moments where you went ‘Huh?’. Shredder was almost a non-issue even though he was supposed to be the main bad guy. The major problem I had with Shredder is because the movie makers changed the turtles so much, made them into 6 foot, mega-strong creatures a normal human didn’t stand a chance. In order for Shredder to be any kind of challenge they gave him a powered, robo-suit which really took away the martial arts battle between a master Japanese warrior and the turtles like in the comics.

The rest of the story is a bad-remix from The Amazing Spider-Man rooftop spraying of a toxic gas and a big chunk of the movie takes place high in the mountains that apparently is a short drive from New York City. Conveniently at the base of these mountains is a sewer line that runs right into the city.

Megan Fox as April O’Neil is as deep of character acting as you would expect. Will Arnett as some kind of comic relief was wasted talent and I don’t even remember his character’s name, even though I saw the movie about 12 hours ago. Whoopi Goldberg is in it, although her character is never explained, I assume she was the TV Station boss or something. The turtles are the biggest disappointment. You never get the sense of camaraderie or brotherhood. Splinter doesn’t feel to be the wise master/father figure. The best one was Michelangelo for his goofy persona but the rest never gel together. The animated series on Nickelodeon is far better than this movie ever could be.

Enough of the negative aspects. With the bar of expectations set at the bottom you get a decent popcorn movie. The action is plentiful and fun. The CGI is decent although there were many sections where the CGI looked rushed and laughable.

At the end of the movie I was entertained. I will say the best parts of the movie were watching my 5-year-old light up when the turtles and Shredder appeared for the first time and him calling out all the other characters he knew from the shows. Other than that it’s forgettable.