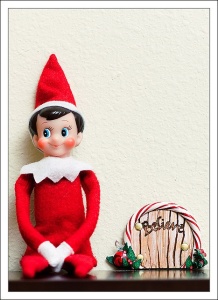 Elf on the Shelf. The seemingly harmless Christmas fad that has taken the country by storm, made the inventors multi-millionaires and make everyone else sit back and say ‘It’s so stupid it’s brilliant…. bastards.’ For those that are not familiar, yet reading this blog, let me bring you up to speed. There’s this guy called Santa and he lives in the North Pole, he brings presets to all the good children on the 25th of December. The elf is a magical character that reports back to Santa each night and let’s him know how you are doing. Then in the morning the elf is in a different location. There are rules with the elf, no one can touch him during the day, if you do the elf loses all his magic powers. The elf’s magic works only at night (when the kids are asleep) to report back to Santa. The elf watches what you do, so be good. The Elf on the Shelf is an extension of Santa’s naughty and nice list and a nightmare for parents as we have to remember to move the damn thing each night or face the disappointing wrath of the kid’s in the morning.

The Elf on the Shelf has been around for almost 10 years now. Harmless. A great addition to the Christmas season extending the fun through the month of December. The kids love it, parents hate it, and social media goes wild over the elf selfies and the crazy and sometimes inappropriate positions people put the elves in.

Everything was fine and dandy until a college professor on a PhD or tenure project has to go and jump the shark and attempt to ruin it for everyone while pushing a political agenda at the same time. Introducing Dr. Laura Pinto from the University of Ontario Institute of Technology.  Dr. Pinto wrote a piece, that someone published, called Who’s The Boss – “The Elf on the Shelf” and the normalization of surveillance. The paper/article/blog post goes on to try to explain that the Elf on the Shelf is conditioning children to unconditional acceptance of government/state sponsored surveillance.

Yes, this is what college professors spent time on to put together. Using the Elf on the Shelf as the focal point, this is nothing more than a tin-foil, anti-government surveillance piece. In the shadows of the NSA revelations everyone is on edge but this goes a little beyond common sense. I read the paper three times and it stopped short of calling the Elf an Illuminati plot to usher in the New World. It’s close though.

Rather, the hands-off “play” demanded by the elf is limited to finding (but not touching!) The Elf on the Shelf every morning, and acquiescing to surveillance during waking hours under the elf’s watchful eye. The Elf on the Shelf controls all parameters of play, who can do and touch what, and ultimately attempts to dictate the child’s behavior outside of time used for play.

Clearly Dr. Pinto doesn’t understand the rules. The purpose is not about the Elf spying on you, the whole point is to extend the mythical, seemingly invisible Santa Clause to a physical link that kids can grasp onto and experience the Christmas fantasy more clearly. The kids have been taught for ages that Santa watches you and if you are good you go on the nice list, bad and you go on the naughty list. Those lists determine presents or coal. I have been doing the Elf for 6 years and will continue for 6 or 7 more years as my second baby grows up. I have no concern that my kids are going to accept open surveillance, my 6-year-old now wants nothing more than total privacy. The Elf isn’t changing that. It’s a game to see where he is in the morning then doesn’t care about being watched between Dec. 1 and Dec. 24th. Our Elf Ernie doesn’t come back Christmas Day because Santa made his delivery.

The gaze of the elf on the child’s real world (as opposed to play world) resonates with the purpose of the panopticon, based on Jeremy Bentham’s 18th century design for a model prison (a central tower in a circular structure, surrounded by cells).

Sure, the inventors and marketers of Elf on the Shelf had 18th century prisons on their minds when they rolled it out. Nailed it.

What is troubling is what The Elf on the Shelf represents and normalizes: anecdotal evidence reveals that children perform an identity that is not only for caretakers, but for an external authority (The Elf on the Shelf), similar to the dynamic between citizen and authority in the context of the surveillance state. 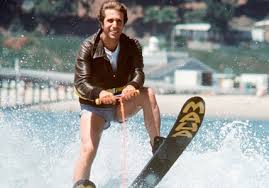 OK, this is where the shark is being jumped. Let’s break down this logically and historically. For centuries humans have been raising out children and society as a whole with an encompassing surveillance theme as Dr. Pinto tries to connect here. Let me list a few counter-arguments –

Although The Elf on the Shelf has received positive media attention and has been embraced by millions of parents and teachers, it nevertheless represents something disturbing and raises an important question. When parents and teachers bring The Elf on the Shelf into homes and classrooms, are they preparing a generation of children to accept, not question, increasingly intrusive (albeit whimsically packaged) modes of surveillance?

No Dr. Pinto, the Elf on the Shelf does not represent something disturbing nor raise any questions. Stop it. Stop being a college professor publishing something just to publish something. Taking a political issue and searching for some connection where there is no connection. You might as well write a paper about Santa and the acceptance of allowing a figure of authority into your home, much like a police state enforcer wanting to investigate your life. A disposition about the Tooth Fairy’s DNA collection program of citizens when she takes the teeth and the acceptance of blind government based bio-collection requests. Finally she could wrap it all up with a thesis on how the Easter Bunny, an egg laying rabbit, is a pathway to accept corporate sponsored and government supported Genetically Modified Organisms (GMOs). Based on the loose connections Dr. Pinto attempted to make with Elf on the Shelf and surveillance, my ideas for papers would get published overnight.

Overall I say this ‘story’ bothered me because of the media attention it got. I saw this on a few of my feeds and what I subscribe to are pretty selective. This goes into a deeper discussion around the system of Big Education and the people training the next generation of the workforce and what they are exactly feeding them. I dealt with it when I went through college and quickly realized the best teachers that actually taught were ones that had yet to reach that coveted tenure status with the University. The ones fighting to stay employed taught, the ones that got their immunity idol went off and did ridiculous year-long research projects like this that provide nothing to the University (besides name drops) or value to the education advancement of the students.

There is so much more I could go on with but I won’t… for now.