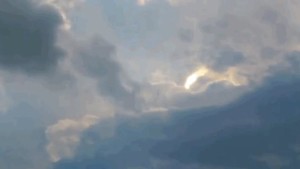 Recently a very impressive video was posted that showed a very strange dance of light in the sky. At first I immediately went to the conclusion that this was another elaborate hoax, video editing for a school project in an attempt to be passed off as original. But after watching it a few times I felt that this was in fact real and what was happening in the sky was not fabricated. So that goes into the second question, if it’s not fake, what the heck is it? The first video has some NSFW language, headphones or mute it, the sound is not important.

I first saw this posted on a UFO/Conspiracy site I follow, a guilty pleasure of interest of mine, and that as their answer. A UFO sending a message. I was not going that far, it was something but not that. I also took note that this was taken when the sun was setting, the angle of the sun and the light seen had to be because of that orientation. For myself with extensive interest in meteorology I have never seen this before in person or on video. After looking around I found an explanation on what this is.

Over at NASA’s Astronomy Picture Of The Day they posted about this phenomena and called it a ‘dancing sundog’. For those in the southern parts of anywhere you may not be aware of what a sundog is or may not know it by that name. Here in Minnesota sundog’s are common place and in the winter months we see them regularly. A sundog is that rainbow ring around the sun, usually when it’s high over head. What it is is basically a rainbow, a refraction of light through ice particles instead of rain.

In sum, this hypothesis holds that a lightning discharge in a thundercloud can temporarily change the electric field above the cloud where charged ice crystals were reflecting sunlight. The new electric field quickly re-orients the geometric crystals to a new orientation that reflects sunlight differently. In other words, a lightning discharge can cause a sundog to jump. Soon, the old electric field may be restored, causing the ice crystals to return to their original orientation. To help this curious phenomenon become better studied, sky enthusiasts with similar jumping or dancing sundog videos are encouraged to share them.

The leading hypothesis is that dancing sundogs are caused by electrically charged clouds, thunderstorms usually, and when lightning occurs it temporarily changes the electrical charge of the field around the cloud that rearranges the ice particles and released when the charge goes away. Being that the refraction is an illusion based on your point of view in relation to the source of light and the ice the light appears to dance as in these videos below.

This is just another wondrous mystery and reaffirms that we don’t fully know how this planet functions, why and what else is going on that we have yet to observe or be able to explain as natural.