It’s that time of year again, autumn, Halloween and that means the annual visit to the Soap Factory’s Haunted Basement in Minneapolis, MN. This is my third consecutive year attending this show and eighth year for the rest of the crew, two rookies this time as well. You can read my thoughts on the last two here and here. There were 10 of us that went and even though last year was absurdly bad in their ‘horror’ attempt we decided to give it another chance.

Prior to signing up I checked out this year’s description and it gave me a little more hope of improvement. As I re-read the description for writing this post I noticed a change. Before they explained there would be two paths and easy way and a hard way, they might switch it up so yo never know. Interesting, reminded me of two years ago. I see on the Soap Factory website mentions of the two paths have disappeared.

This is how it’s written today –

This year’s Haunted Basement returns to its roots with a pathway of terror leading to artist created environments built throughout the entire 13,000 square feet of The Soap Factory’s basement. You will be fed into the depths 2-4 at a time where you will be forced to wonder – will I be lost? Will I be separated from my group and forced down an even more unspeakably grotesque path of terror? Will I be stuck here indefinitely?

The answer is yes….all of that and more.

This is the snippet I wrote about before, this is right from their website at the time –

Once its your turn, you’ll separated into small groups and fed into the depths a handful at a time where you will then be given a choice: follow the signs to take the “easier” path or be brave and take the path filled with more horror and more torment than ever before.

Once a path is chosen, there’s no turning back. But beware; we may decide to switch the signs at any time.

I felt cheated since we bought the tickets over a month ago under the impression of the two paths and it actually being more interesting than last year. 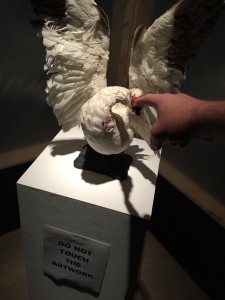 This year you went down in groups of 3 to 4 people, that was still true. Expecting a return to the small, intimate freak out were soon diminished when we hit the basement. It wasn’t an open area but it wasn’t a show like two years ago, it was a mix of both leaning more toward a standard haunted house with ‘stations’.

The first room is pitch black, people walking around with water bottles misting the air getting you wet which is creepy. However… one guy grabbed me and with the water bottle set to full jet, not mist, hit me full force in my eye. That hurt like a SOB, even a day later my eye is still tender. Ever dive into a swimming pool from a high point with your eyes wide open? It felt like that.

After that you walk through stations, separated by the same bed sheets as last year, and get ‘boo’ scared by the goofiness. Red paint on the walls, ‘scary’ sounds from speakers everywhere, it was pretty ‘blah’.

The center of it was the most uncomfortable, not scary, but uncomfortable part with the Santa. I got picked out and Santa sat me down on a couch then proceeded to rub his steel wool beard over my face while singing a slow rendition of Jingle Bell Rock. Not scary but more of a creepy guy on the bus “get the heck off of me weirdo” uncomfortable.

The rest of the pathways were just variations of the same, doctors, woman screaming in a bathroom, and it was pretty forced in the flow. There’s a little tunnel you crawl through, I got diverted to a hallway that had nothing in it. Nothing else was really rememberable.

At the end is where you wished you wore less than nice clothes as they got a little liberal with clapping hands full of shaving cream everywhere and throwing oatmeal ‘puke’ on you. One of the guys in the group didn’t realize he was ‘puked’ on until we got outside into the light and it was caked all down the front of his shirt. The fact he didn’t know he got hit showed the lack of focus to get the visitors to feel the effects.

Then it was over.

We waited close to 30 min in line to get downstairs and we were out in 15-20 minutes. Short.

Looking back on it they give you a safe word ‘Uncle’ to call out if you need to leave because you are too scared. Honestly I couldn’t think of one area where that would be necessary even to people that fear haunted houses to call out ‘Uncle’. Everyone that was down there with me, in my group and strangers, were all laughing the whole way. Haunted houses aren’t supposed to be funny, fun, but not funny.

This will be the last year of the annual Soap Factory tradition. The Halloween tradition will continue, only now we will seek out something more up our alley, scarier than the level of peeled grapes in a bowl. Maybe if they bring back the Cirq director and put more effort into the scare effect I would consider one more chance but most likely next year I will be reviewing getting lost in the country, away from the city lights, trying to get out of a random Minnesota corn field.