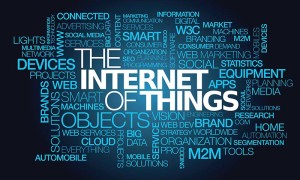 I am technologist, a nerd, a geek, a gadget-head, video gamer, reader, learner, writer and work in Information Security for my career. I am plugged in and on top of the industry trends and how the world is applying new, cheap advancements. The concept of the Internet Of Things (IOT) is slowly becoming the next hot bed of innovation and crazy ideas of extending technology deeper and deeper into our lives only with IOT it’s hooking everything up together through apps, networks, clouds and the entire Internet. Some of it is useful like IOT medical implants that can talk externally when someone’s heart is about to explode, cars calling to a service center to tune itself or houses becoming ‘smarter’ to regulate heating and cooling to save costs and energy. Those are benefits and worthwhile endeavors.

Some of the other implementations are in toys, appliances, office equipment and so on. Those are hit or miss if you really need those things connected to a network to communicate with remotely. I could argue one way or another. Then there are the things that are created for no purpose other than to sell something and slap on a cheap technology for no reason other than because they can. Heck, we just bought a Sonicare Kid’s toothbrush that has an iOS app with a game-like system to get him to brush his teeth more and better. The more he does it the more points and stuff the app unlocks. Brilliant.

I came across one of these today and being a techie I had no choice but to buy it. I could have said no, but really I had no choice. It had to be in my possession to see for myself.

I was at my local Sam’s Club today and in my store they have a Sam’s Liquor store attached. Being the weekend I browsed through there and in the corner they had a table setup with odd looking bottles, they looked like they had black tape across the front. I meandered over there and the saleslady intercepted me and showed me the bottle. On each bottle, not a single fancy display bottle, every bottle for sale was a full LED screen. She turned it on and across the LED scrolled ‘Happy New Year’, I thought it was gimmicky. But then she went deeper and showed me the other pre-programmed LED messages. Fine. Cheap LED screen, small chip and battery all pre-programmed. I was wrong. 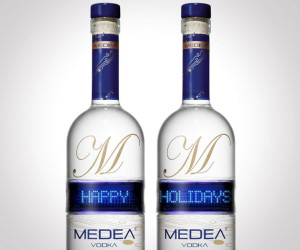 This bottle of vodka, Medea Vodka, had a full customizable LED on it where you can put whatever you want to scroll. I looked at the LED and it had two buttons and I imagined scrolling through each character and build a message, what a pain. Nope. There’s an iOS and Android App that you use to customize it. What!? Yes, you download the app and it connects to the LED via bluetooth and you can build your own messages and upload them to the LED. See below.

Want to sell a new vodka? Put an LED on the bottle you can customize the messages with a smartphone app!!! Medea vodka.

Get used to this. Whether is makes sense or not IOT is here and it’s only going to get bigger. As it gets cheaper to build and mass produce bluetooth enabled things, marketers will stuff them into anything and everything they can. The LED labeled vodka bottle is useless. I see it as a huge waste of materials, toxins and plastics that are going to get tossed in the trash. I don’t think you would be able to toss these into the regular recycling bin with the battery in there. But we had it and there are thousands of bottles around now. The only benefit the LED bottle has is that I will keep the bottle as long as the battery lives, I’ll fill the bottle with colored sand or food coloring water to make it interesting. Outside that there is no reason to add it. I still bought it, I think it’s a cool thing to have, I can also think of several other beneficial places to add an LED like this to other than a booze bottle.