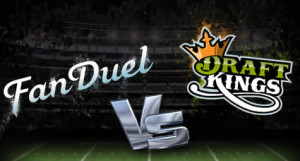 This year may be the end of the daily fantasy football sites for money. The two leaders, FanDuel and DraftKings, offer fantasy sports on a daily or weekly basis and big payouts if you win. Up until recently they have operated under the radar of the mainstream media and public but this year changed. If you have watched any NFL game this year you will know and be sick of FanDuel and DraftKings because their marketing is everywhere. It’s unescapable. To be honest it got me to throw $25 into it to try it out. The only reason I did is because the site had the ability to use PayPal as a payment source and I had a few bucks of Ebay junk auction money sitting in my account. Otherwise I would never spend a dime on something like this.

For the last 15 or 20 years I have played traditional fantasy football leagues, draft a team and manage it through the year. Daily sites allows you to pick a new team each week for a price and depending on the game you choose there’s a chance to win huge money. It’s quick, easy, the rules are the same for everyone (sort of), and it’s different each week so if you pick a bad team you don’t have to suffer 16 weeks with it. On paper it seems like a fun idea but after playing it for the last 6 weeks I can say that I agree with the states and legal system, this is gambling and not a game of skill.

“All winning outcomes reflect the relative knowledge and skill of the participants and are determined predominantly by accumulated statistical results of the performance of individuals (athletes in the case of sports events) in multiple real-world sporting or other events.”

Horse racing is considered gambling and I don’t think you will find anyone that will disagree. If that’s gambling than why not daily fantasy sports?

Horse Racing – You have a field of horses and you pick a horse or set of horses and guess on their performance. Win, place, show, box trifecta, exacta, and so on. Each horse has a hard analysis on them and odds on how they will do. Now, where it changes from a game of skill to a game of chance is no matter the odds the ‘experts’ put on the horses a multitude of variables that impact the outcome of the race. A for sure 3-5 odds top horse could finish dead last while the 20-1 horse wins all because the track was wet from an unexpected rain storm or the horse ate too much before hand and had gas or the wind was wrong.

Daily Fantasy – You have a field of players and you pick a player or set of players and guess on their performance. Each player has a hard analysis on them and odds/predicted points each will score. No matter the expert’s analysis, the performance of the players are impacted by a multitude of variables during a game. Injury, overtired, bad meal, fight with the wife, weather, the officials, the distractions from the crowd and so on. Variables the players have no control over. So instead of Aaron Rogers throwing 5 TDs against he Lions at home as all the experts predicted he would be, instead he lays an egg. On the other side of the league an unknown RB, owned by 1% of all players, has a Top tier day. No experts analysis would ever say to put this RB on your team but those that did, through luck and chance, felt the benefits of a rare day that won’t be repeated.

Daily Fantasy and Horse Racing are so close in their style where you can’t say they aren’t gambling.

There’s another aspect of these sites that push it more into the gambling realm and that’s with the contests and entry fees. These daily sites are not one team per player. There are hundreds of weekly contests with varying levels of payouts from a few dollars to $20,000 to free tickets to the national challenge. Most contests allow people to submit more than one team and as I played I wold see some players have 100, 200 or more entries in a single contest. Their teams would be slightly different but over all across all 100 they would have enough variation to cover the top players to almost ensure that they would be in the winning brackets at the end. They spend $100 ($1 per entry) and if 20 of their teams make it in the winning groups they could easily double their money or make ten times that by taking smaller payouts with more teams.

Once I saw that I only played the contests that forced one team per entry, but I am sure people had multiple accounts to still game the system to get an edge. Gambling.

I love fantasy sports, it adds a flavor to the sports entertainment arena that gets me interested to watch the entire league, all teams, rather than only focus on the home town team. Daily fantasy sites are a neat idea, but they belong in a sports book and out of the public domain. At the end of the day, no matter how they spin it, these are veiled gambling sites. So if you play enjoy it while they last, because they will be dismantled or crippled down to being just like any other traditional fantasy site in the near future.