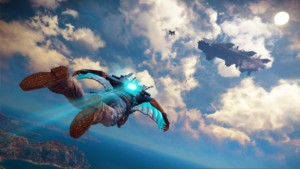 Just Cause 3 for PS4 is probably my favorite, most entertaining game on the PS4 now. It’s not overly complicated, it’s ridiculously over the top, the controls are fairly simplistic and the open world is huge to explore. I can throw in Just Cause 3 and go on a destructive rampage for 30 minutes or an hour and enjoy it. Based on my busy work schedule, kids at home, my inability to engage into huge 100+ hour RPG style games isn’t in the cards for me anymore. Just Cause 3 fills in the gap and the first DLC Sky Fortress aims to extend the core game.

Because I don’t play as many games as I used to anymore the games I do make investments in are ones I know I will play completely through so I generally buy the full Season Pass options with them. Just Cause 3 I did just that and eagerly awaited the release of the first DLC called Sky Fortress. The main game I completed weeks ago, unlocked all the weapons and received almost all of the gears to expand all the options. Near 100%. I was hoping Sky Fortress would give the core game new life.

Sky Fortress introduces the eDEN corporation and their flying helicarrier style ship, attack drones and a few new toys to play with. We also get a new equipment upgrade in the jet wingsuit which allows short bursts of jet power to stay aloft, basically forever, without having to get a plane. In addition, there are also a new missile launcher and machine gun added to the suit for added power.

Overall the DLC additions of the new weapons, including a new Bavarium machine gun, new attack drones and game improvements did make the game better (especially the load time improvements). I am looking forward to doing the ‘older’ wingsuit challenges to get max points on with the new jet wingsuit. As for the new game content depth Sky Fortress falls flat. I have two main complaints that I hope are improved in the next two DLCs.

The added missions are way too short. For the DLC being $10 or $11 as a stand alone, many people are going to be greatly disappointed by what they get out of it. I embedded my Twitch session of me trying out the new DLC although I was shocked when I completed it inside of two hours. I had a ‘That’s It?’ moment. If you blast through the story only and not do the new challenges you could complete it in under an hour. The DLC basically has four areas to liberate. The flying fortress is broken up into two areas and there are two ground areas to liberate and a few mini-bosses that are easily passed, leading into complaint #2.

If you are like me and completed the game before hand and unlocked all the weapons you are way too powerful to get the full experience and challenge of a new DLC. If you have unlocked the M488 gun, which basically is a Bavarium nuke gun, you can wipe out the Sky Fortress too easily. Launch a few of those from your parachute and you’re done. Allowing you to go into a new mission maxed out removed all the gameplay challenge to make it fun to conquer a new mission and enemy. After the first few minutes you will see in my replay below I dumped the M488 and picked up a regular rocket launcher because of that.

Here’s my complete run through of the DLC, just game play no comments:

There are two other DLC planned for Just Cause 3 that will be released throughout the year. For me that wait will be painful because I have pretty much maxed out all I can do in the game and will shelf it until later this year. With no multiplayer in the game the replay for Just Cause 3 does have its limits.

To the developers, my suggestions for the next DLC packs:

Create the story in a way that you cannot use your Rebel Drops or any weapons you collected and maxed out. Basically start you over and make the players work back up to strength with the new enemy and missions. For Sky Fortress it would have been extra challenging that you lost your parachute and only had your jet suit, something like that. Put the challenge back into the game other wise you can soar in with an M488 and be done before the full experience of the DLC is realized. Less than two hours of gameplay for a new DLC that took months to make and release doesn’t add value or good reputation for future releases for people to make an investment in Season Passes if bare bones content are what’s being delivered.

I have the Season Pass so I will get all the content regardless, I just hope the next DLC packs are a little more meaty.