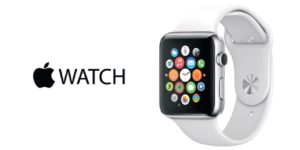 Six months ago I decided to purchase an Apple Watch for Mrs. Binary. A few weeks after I acquired one for myself. Now enough time has passed to integrate Apple Watch into my routine I can post about what I think about it and what I would like to see in the next iteration.

I have been a Mac user for quite some time. The household has owned pretty much every generation of iPhone, iPad, iPods for years. I use a Mac primarily as my home computer and laptop but we still have Windows machines as well. Initially my thoughts on the Apple Watch were skeptical and I was not on board. I thought it was gimmicky, pointless and had a hard time to really see the value.

Then FitBit comes along with their fiasco of skin burns on their latest model, which Mrs. B and I both owned. She got the burns, I did not, but dumped the FitBit anyway. In limbo for a while the apps for the Apple Watch got better then the new OS update really made it appealing. As a gift I got Mrs. B one and she loved it right out of the gate. So I got one as an early XMas gift. Six months later I am reviewing.

Why not right away? The Apple Watch is an extension of the iPhone and needed time to get into a routine on how I used it and figuring out really how to use it.

Now I am ready I can say that I am an Apple Watch fan, I don’t love the device yet, but I really liked how it changed my use of my iPhone.

The Apple Watch can be best looked at as an extension of your iPhone. There are health tracking features built in but if you are looking to get an Apple Watch for that aspect alone, don’t. There are better and cheaper fitness devices for that.

The Apple Watch is your notification center. That is what I found to be the most impressive and game changing aspect. My Apple Watch is where I get all my notifications, email, alerts, texts and in some cases phone calls from. I found over time I used my phone directly less and less.

When I have the Apple Watch on, the phone doesn’t alert, the watch does. This cuts down on double vibrations or sounds. I dont have to dig around to find my phone, pull it out, unlock it or read it to see a text or email that came in. I can just lift my wrist and it’s all there. If I have a short response I can fire off a text from the watch. Very handy in meetings on planes or public places where I don’t want to be ‘That Guy’ when responding to calls or texts.

Second is the apps. Weather, games, Outlook inbound email, my Ring Doorbell, everything I can have send notifications to the watch. Again, not having to dig out my phone to see them.

Application usage is mediocre at best. I will get into more of this later. I do use the Apple Watch for apps. Swarm for check-ins, DayOne for quick journal updates, Nike+ Running or MapMyRun to start workouts, a few games are the primary apps. The rest are borderline unusable, too slow.

One app/feature I use every single day is the timer. If it’s timing reading time for my kids or cooking times dinner I always use the countdown timer on the watch. I lose track of time often but I set a 30 min. timer, my wrist vibrates vigorously when it’s done. Fantastic time management tool.

The Apple Watch is comfortable. The band I have is black, bland, boring but it works. I can tell you I am not going to spend $50 or $100+ for a new ‘design’ band. No way. I did try a $30 metal band from Best Buy but it was terrible and I returned it an hour later. I also don’t trust Apple to keep the physical specs the same and have the first gen bands work on an Apple Watch 2.0. They have a trend to do that. Other than the band the Apple Watch is fine. I have the large model, Mrs. B has the smaller model which fit our wrists just fine. I think the smaller model on my wrist would be too small to work with.

What Would I Change

Now that I have had some time with the Apple Watch I can say that I will be interested sticking with it going forward. I am too hooked on the notifications to go back to phone only. However, Apple is going to have to make some big changes for me to upgrade to the next model or wait until they do fix the flaws.

Those improvements, in that order of necessity, are what I would like to see in the Apple Watch 2.0. The Apple Watch may not appeal to everyone but in my life and work style it fits perfectly.