The first movie in the Star Wars movie anthology is The Phantom Menace. This movie starts before the Empire as we know it is formed. The Empire’s founder(s) had plan to build their vision through a series of political lobbying, aggressive use of military intimidation and build their capital resources behind the scenes as quickly as possible. Like any corporation of today, the Empire began with an idea.

The main contributor in this effort is Senator Palpatine. A politician, with a dark secret, the has grand aspirations of gaining as much power to push his own agenda. In order to achieve his plans he chooses to use the political system to gain ground. In The Phantom Menace he partners with another corporation called The Trade Federation. Instead of doing this through his public facing persona of a Senator from Naboo he runs the partnership as his dark alternate personality, Darth Sidious.  He then uses the Trade Federation’s forces against his own constituents on Naboo in order to push out the current leader of the Senate and make a move of his own to replace him.

With people at risk, some dying, and unable to escape through the Trade Federation’s blockade spending time to lobby, gain supporters or use the courts wasn’t a viable option. Senator Palpatine forced the senate’s hand to vote out, legitimately, the current Supreme Chancellor by having the queen to bring forth the vote of no confidence. The senator, not taking anything to chance, ensures he gets one of the nominations to replace the leader.

The secret partnership to use the Trade Federation against his own planet created a sympathy vote within the Senate. Through more manipulation the Senator’s plan succeeds and he is voted Supreme Chancellor and now has control over the Senate of the Republic. Once in that position his future actions can be made legal through his own direct influence and push his corporation forward. Anything that Palpatine needs to happen going forward he can ‘make legal’ through his dual positions. Reflected in today’s world it could be tax breaks, relaxing regulations, approving permits, ignoring employment violations, favoritism with government contracts, slow down any legal/court processes and remove any other obstacles of opposition along the way. 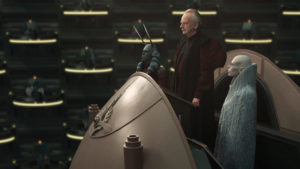 This is the foundation of how the Empire grew so powerful so fast, there were no legal challenges to stop them. Palpatine played both sides of the coin by creating a massive false flag situation against his own planet. This in turn forced the Senate to make changes that Palpatine took advantage of and maneuvered himself into the ultimate political seat of power. Once their he began to abuse his power to clear the path for his Empire to grow. This where the problems will begin and organically grow out of control. Palpatine’s plan requires fast growth in order to fend of competitors and control the market, a growth that will place focus on infrastructure expansion, resource acquisition, strong perimeter defenses but take away from proper risk assessments, incomplete internal procedures and operations, lack of internal governance or thorough reviews of plans or projects.

There are a few design practices in the Star Wars world that is seen in this movie that needs to be addressed. The flaws through this blog series are to not isolated to just the Empire but seem to be  a standard practice in the design and use of most technology in the Star Wars universe.

One major design flaw comes from The Trade Federation and how they built their army. The army consisted of droids, no ‘people’ soldiers. Droids may be easy to manufacture, cost effective, expendable and easy to control but the Trade Federation designed them with one critical flaw. A single point of failure – complete reliance on a single command and control center. The Trade Federation control ships acted as the hub. Instead of having the droids be self-sufficient and fail open when communications are lost the droids simply power off when communications are cut. If this flaw is known then an attacker or defender doesn’t need to worry about thousands of droids but put all the effort toward one ship. This is even more confusing as the droids showed self-awareness, decision making capability and had a command structure yet they had a life line to remain functional.

The other misstep is with the physical design of the control ship itself. The ship’s main power core is sitting in an open, public area with no apparent security controls or additional physical controls to protect it. The over reliance of a front facing defense to stop an incoming attack sacrificed strong internal controls. When Anakin penetrated the hull and flew into the hanger, the core was sitting exposed in an open area and easily compromised.

Next – Part II: Attack of the Clones.