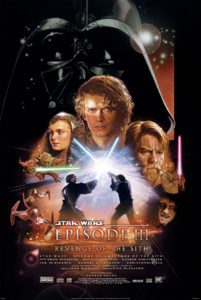 The Revenge Of The Sith is the final chapter of the first trilogy, chronologically, of the Star Wars story. The first two movies, The Phantom Menace and Attack of the Clones, covered the planning of the new corporation. We saw how Palpatine played two roles. The public facing persona to work the political system. The second secret role as his true self, a Sith Lord, to create a live war setting the stage to move in.

Revenge of the Sith is about clearing regulatory obstacles and setting up new management to run the company. Palpatine has put in motion the political climate necessary to have a war, created a manufactured need within the minds of the people through a false flag war and has a plan to hold onto that power after the fact. With those now in motion, he needs to clear out old partners and bring in new fresh management.

We begin with a great battle over the capital of Coruscant. Two Jedi, Obi-Wan and Anakin, are fighting their way through to rescue a ‘captured’ Supreme Chancellor Palpatine. Apparently a Separatist commander called General Grevious was able to get his hands on the Supreme Chancellor. Of course we know that this was nothing more than Palpatine’s plan.

The Jedi reach Palpatine but also confront Count Dooku who is there in support of the Separatists. This is where the final phase of Palpatine’s plans come together. Since Dooku was working with Darth Sidious, Palpatine, he was in on the plan. When the Jedi ‘resuced’ Palpatine, they had to fight Dooku first. Upon beating Dooku to submission, Palpatine convinces Anakin to move onto the next phase. Eliminate old partners to make room for new management. Dooku is taken out of the picture.

This was a management mistake on Palpatine. Dooku was a trusted advisor and loyal manager. He had business contacts and relationships throughout the industry, legacy knowledge of the plan and had unique skills. Palpatine probably figured he had too much legacy knowledge and was a threat to his grand plan. Therefore had to be removed from the company.

The majority of the movie shows Palpatine slowly recruiting Anakin to take over as Senior Vice President. During the negotiations Anakin reports to the Jedi that Palpatine is the Sith Lord. When Anakin and Mace Windu confront Palpatine and ultimately engage in physical confrontation. Fearing Mace would kill Palpatine, Anakin turns on Mace resulting in Palpatine able to overcome and send Mace out the window. Through this Anakin chooses to accept the position of SVP and is given the title Darth Vader.

Now that he has new management in place Palpatine completes the final stages of his plan. First he sends Vader to wipe out the remaining business partners. He then issues a company wide order to the clones to eliminate all the Jedi competition. Finally goes to the Senate declaring himself Emperor of the newly formed Galactic Empire.

With the corporation firmly in place the few remaining survivors flee and go into hiding. 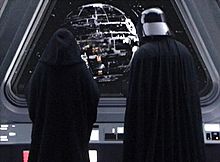 Through all this planning and rollout of the structure of the Empire we get a glimpse of a large scale project planned. A moon sized ship/weapon called the Death Star. The sole purpose is to use hard intimidation through the use of this tool because the Emperor knows he doesn’t have the man power to keep thousands of worlds inline. If the Empire is going to stay in power, the Empire must build this as fast as they can.

This is where the overlooked design and operational aspects of building the Empire will begin to balloon in to large scale failures.

Next up – Rogue One.