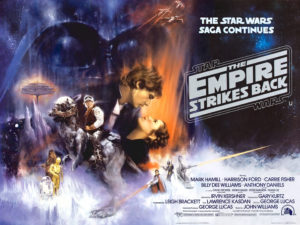 The next chapter in the Star Wars saga is The Empire Strikes Back which starts three years later. Although the Empire does gain some ground in the fight against the state sponsored hackers we still see the same faults plaguing them. At the end of A New Hope the Death Star was exploited and destroyed, the only surviving Empire employee was SVP Darth Vader. We assume the other remaining Tie Fighters were destroyed.

At the beginning of Empire Strikes Back (ESB) we see the Empire sending out probe droids in an attempt to find the command and control center of the Rebels. We then cut to the Rebels on their new hidden base in the Hoth system one of the probes land. One question for the Rebels is if the system is hard to detect approaching ships why didn’t they have the energy shield active all the time? It could deflect any bombardment, why not probes? The droid makes it to the surface, finds them and sends a message out to the Empire.

A planetary battle ensues, the Rebels are forced to retreat and Luke heads to Dagobah to train with Yoda. We jump to Han and Leia heading to Cloud City where Han’s old friend runs the city there and might help them. The Empire tracks the Falcon with the help of Boba Fett and arrive ahead of them to force Lando to betray Han.

At Bespin, the Cloud City, Lando spins his betrayal to eventually get Luke to arrive for Darth’s recruitment efforts. Han is put in to carbon freeze to test the equipment and sent off with Boba Fett. Luke arrives, fights and flees Darth.

Although there isn’t much security faults seen in this chapter we do get an insight on the over all Star Wars universe’s security mentality. In Cloud City R2-D2 once again is able to access/hack the city’s central computer. When he was plugged in all he was trying to do was open the door but accessed the core computing center too. This is where we get two pieces of information on the Empire’s security operations failing them.

The first is from the city’s central computer. Apparently someone logged in the central database that the Empire engineers disabled the Falcon’s hyperdrive. That information was freely accessible by R2-D2 and allowed them to bypass and correct this to escape.

Secondly, in A New Hope we see the Empire allow the Falcon to escape with a tracking beacon on the ship. That in turn led the Empire to the Rebel base. In Empire they take a more risky approach of disabling the Hyperdrive (not the engines altogether) and think they would capture them in space. The Empire’s risk assessment and action plans need work.

Both approaches fail them once again and the Rebels with the primary package the Empire wants to capture or eliminate get away again.

Event though the Empire Strikes Back showed us a small slice of the Empire’s operations we can still see how they approach security. Their attitude and confidence on their front facing power failed them as small mistakes allowed for exploitation and asset loss.

Next up Return of the Jedi.