This post will be a continuing updated chronicle of a little disagreement I have with the Star Tribune newspaper. Short version, they hit me with a collection notice for $52 for claimed past due billing. This letter was the first time I received anything indicating I was being billed by the Star Tribune. I was a subscriber of their Sunday newspaper for almost 10 years until I cancelled it in March 2018. My last payment to them was 2/15/18 in the amount of $39.84. When I received the next renewal slip, I didn’t send it in. When my renewal from Feb. 2018 hit the end, the newspapers stopped being delivered in April. Now, since the newspapers stopped that showed the Star Tribune acknowledged my lack of renewal and cancelled my subscription. It appears this was not the case and continued to bill me under a 90 day window they claimed to have for cancellations, even though no services were rendered for the billing. I have a problem with this.

I tried to work with them over the phone on this and they refused to budge or even attempt to listen, so I will document this little journey here for others that may be in the same predicament to see how it turns out. If I lose out, I lose out $52 (maybe some court fees) and a 100% guarantee the Star Tribune will never, ever get business from myself or anyone else I can convince (that will happen anyway at this point). Also, this back and forth that will occur and maybe even a trip to small claims court will cost far more than the collection amount. I will not be pushed around and think their word is more correct just because their computers tell them so.

I cancelled, the delivery stopped when it should have…. so should have the billing.

Side note – I have no problem paying the $52.17… but I demand to receive $52.17 in newspaper delivery for it. This is my point and why I am disputing their claim. No one pays for nothing received.

Here’s the story and I will update this post as it progresses. I assume this will take weeks or longer to get through so stay tuned to Twitter and Facebook for fresh updates.  –

I received a letter from a collection firm Biehl & Biehl claiming I owe Star Tribune Circulation $52.71. Although I will be laying out all the facts, I cannot and will not hold anything against any firm hired to chase things like this down… yet. They are just doing their job they were hired for, regardless of the legitimacy of the claim.

That letter is here – 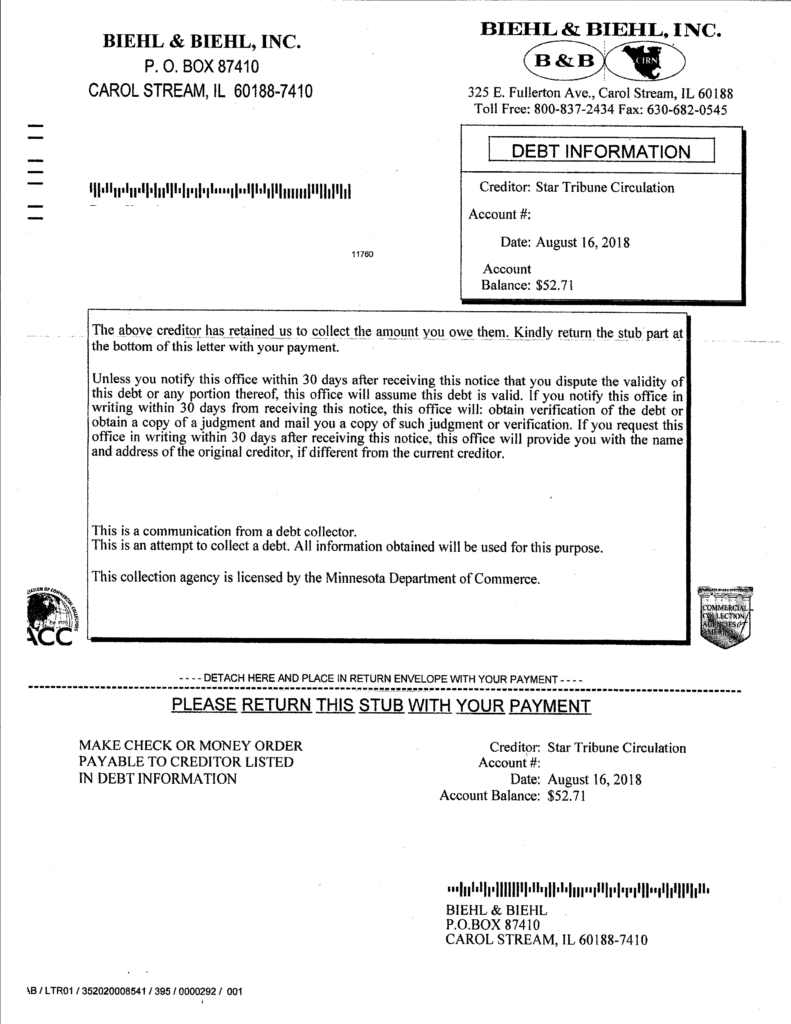 8:25am – I called the Star Tribune billing department to ask why they claim I owed them money. They stated the past due was for services through June, yet I received no newspapers after my last renewal expired. The agent, who I cannot fault for doing their job, stated they have a 90 day window for cancellations and they require a phone call to cancel subscriptions. Two problems with that, first no where on the renewal slips I received did it state that. They did state that to continue the subscription, send in the renewal form, if you don’t delivery will be stopped. I didn’t and delivery was stopped. Second, No services were being rendered by the Star Tribune at that point and no legitimate reason to continue billing under a mythical 90 day policy they claim to have (which is why they claimed June 2018., April to June = 90 days).

The agent refused to work through it so I ended the call and proceeded with the collection agency letter route.

Per the instructions in the letter, see above, I wrote a letter to dispute the claim and mailed it. Now what I will get in return is more paperwork from the Star Tribune that details the claim of the debt which is what they say only, they can claim anything they want basically, what they won’t have is proof that they delivered newspapers during that time, because they didn’t. Their billing was for no services rendered. Regardless if they sent 1 letter a day and called me every hour, demanding money, it’s irrelevant as no newspapers were received. Even if I did get newspapers delivered I would have called them and told them I no longer wanted the subscription since they missed the lack of renewal, but as the newspapers stopped I took that as cancellation acknowledgement.

That letter is here –

On Aug. 23, 2018 I received the attached collection notice from your firm. I am writing to you, per your letter’s instructions, to dispute this claim by Star Tribune Circulation of an outstanding debt of $52.71.

I contacted the Star Tribune on 8/24/18 at 8:25am to inquire to why they are claiming there is an outstanding balance. I confirmed that my last payment for services was submitted to them on 2/15/18 in the amount of $39.84 for a renewal of the subscription. Per their renewal slip wording, to continue the subscription pay the renewal. I did not send in the renewal, as I wanted to cancel the subscription, and a when the paid through time period expired in March/April the newspaper delivery ceased.

I received no late due bills or phone calls from their subscription service about any outstanding or late payments and as no newspapers were delivered after the renewal expiration I was not expecting any. When the newspaper delivery ceased it confirmed the Star Tribune acknowledged the subscription cancellation.

Per the conversation with the Star Tribune agent they claim the past due is for services through the first week of June 2018. No newspapers were received after the renewal period ended in March/April. The claimed billing is null and void as no services were received during the time period they claim.

The subscription was not renewed, the deliveries ceased in the time period expected, yet they continued to bill without notifications until I received this collection notice from your firm. As the subscription was ceased and no newspapers were delivered I will not pay any dollar amount for services that were not rendered.

Now I will wait for a response in writing and see what the next steps are.

End of line… for now.