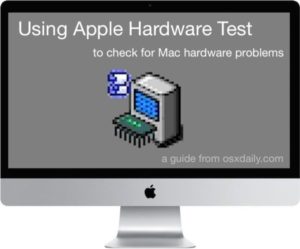 My primary computer is an iMac that is Mid-2011 model. You do the math on the age and yet it’s still performing just as good as the day I bought it nearly 7 years ago. That’s an eternity for a PC and the longevity is one of the reasons I switched from Windows to Mac. I have not been problem-free with this computer but its far less than a comparable Windows machine. Two years ago my hard drive died a slow, horrible grinding death but I recovered easily. Time Machine backups made restoration to the exact state simple and the hardest part was physically replacing the hard drive. At the end I moved up to a 3TB hard drive and continued on my way.

The other random issue I have been experiencing have been kernel panics. That is the equivalent to a Windows blue screen of death (mostly). The panics were far and few between over the years but they did happen. Recently I notice they were occurring more often and I narrowed it down to times when I was using unusually high-memory applications and processes, mainly Chrome and Final Cut Pro.

It started to worry me that my loyal computer of 7 years was giving up on me. I started to do diagnostics on the hard drive and memory but used 3rd party tools like Memtest, Rember and others. Those didn’t show any problems, however after researching how these tools worked I found that testers like run within the OS can’t diagnose the entire memory because the OS is running and is using memory that cannot be analyzed.

The best tool is the one that is built into the MacOS, the Apple Hardware Tester. To access this tool you need to reboot and load it before the OS loads.

To run the Apple Hardware Test reboot the computer and when you head the Apple chime, hit and hold down Option-D.

That’s it. If you are successful you will see the Internet Recovery loading and then the GUI. 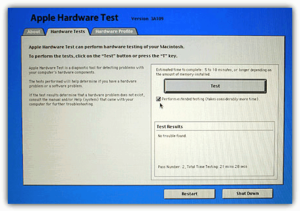 I ran this tool and the first time I received a confirmation I had a memory issue. That’s the first step, the second step was to figure out all the codes and numbers displayed in the tool.

In this case I did a quick google search to help on a resolution and the simple solution was to re-seat all the memory chips. I did that and I have not had a kernel panic through any of the high-memory use activities that triggered them before.

The first part of a return code will tell you where an issue may reside. Here’s that list:

In the case of a sensor or other component there are other codes that will narrow down the problem location. As an example this code “4SNS/1/40000000: TH00-9.5.9.2” shows there is a problem with one of the internal system sensors. The second code T and H tells you that it’s the temperature sensor for the hard drive.

Note – The codes are case sensitive so pay attention.

The Apple Hardware Test utility runs at the low levels of the system and came out as the best hardware diagnostic tool for Macs. Like everything once you learns the inner workings it’s not as complicated as they appear.

If you have a Mac that is starting to act wonky, give the Apple Hardware Test a try to see if you have a deep problem outside the software.

Information Breach? Here’s What to Do: Tips for Damage Control